Ambassador of Pakistan to France
Permanent Delegate to UNESCO 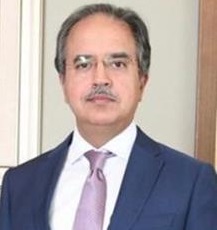 A Pakistani career diplomat, Asim Iftikhar Ahmad was until recently Additional Secretary for UN and Diplomatic Economy and Spokesperson of the Ministry of Foreign Affairs. Before this, he had served as Ambassador of Pakistan to the Kingdom of Thailand and Permanent Representative to the UN Economic and Social Commission for Asia and the Pacific (UNESCAP). Having joined Foreign Service of Pakistan in 1993, he has held various positions at the Ministry of Foreign Affairs and in Pakistan Missions abroad:

As Director General (UN) at the Ministry of Foreign Affairs, he oversaw UN related work at Pakistan’s Missions in New York, Geneva, Rome, Vienna and Nairobi, besides the work of the UN system in Pakistan. His experience in New York included responsibilities for political, peace and security and reform issues, acting as the focal point for the Security Council, reform of the Security Council, political issues in the General Assembly, Special Political and Decolonization (4th) Committee, conflict prevention, peacekeeping and peace-building issues.

Born on 27 November 1966 in Lahore, Asim is married to Asma, and they have three daughters. He speaks French, and likes to play golf, tennis, snooker and cricket.