Students and teachers of INALCO, members of French civil society and media persons attended the cultural day in large number. Ambassador of Pakistan to France Mr. Moin ul Haque was the chief guest at the event.

During his speech, the Ambassador appreciated efforts of the Urdu Section of INALCO for successfully organizing the 2nd edition of Urdu Cultural Day and especially thanked the French students of Urdu section for their enthusiastic participation in various literary, cultural and social events.  He said that this event would help in promoting Urdu as one of the major languages of the world and would create more interest amongst the French students to learn Urdu language.

While highlighting the effort of the Embassy of Pakistan to France to promote Urdu language in France, the Ambassador said that recently Embassy of Pakistan and Ensemble pour le Development Humain (EPDH) of France have jointly launched Urdu classes for the French young students in the suburbs of Paris for the first time in France.

During his visit, the Ambassador also met with Vice President INALCO Mr. Jean Francois Huchet and discussed with him ways and means to further promote Urdu as an optional language for the French students. He also presented some famous books of Urdu literature for INALCO library. 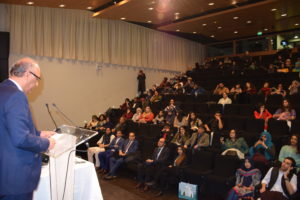