A large number of expatriates belonging to Pakistani and Kashmiri communities attended the event. Charge d’Affaires Mr. Muhammed Amjad Aziz Qazi and other officers of the Embassy were also present.

While addressing the gathering, Mr. Afridi highlighted the gross human rights violations committed by Indian occupation forces in Indian Illegally Occupied Jammu & Kashmir (IIOJK) and urged Pakistanis and Kashmiris living in France to raise the Kashmir dispute at all forums in the country.

He also apprised the audience of various steps taken recently by the Parliamentary Committee on  Kashmir through involving international universities, media, cultural personalities, IT professionals, think tanks, civil society, faith leaders, human rights activists as well as legal experts for effectively projecting the Kashmir cause at the world stage.

Speaking at the occasion, Charge d’Affaires appreciated Pakistani and Kashmiri communities in France, which have always been forthcoming in highlighting the Kashmir dispute through various activities regularly.

Earlier in the day, Mr. Shehryar Afridi visited the Embassy and discussed with Charge d’ Affaires and officers of the Mission ways and means for promoting the Kashmir cause in France. He also emphasized that Pakistani community in France should be facilitated to the maximum extent, in line with the vision of Prime Minister Imran Khan.

Flag hoisting ceremony was held at Pakistan Embassy, France to commemorate the  Independence Day of the Islamic Republic of Pakistan in simple yet dignified manner here today. Charge d’Affaires Mr. Abbas Sarwar Qureshi raised the Pakistani flag to the tune of national anthem in the presence of members of the Pakistani community, Embassy officials and their families.

The messages of the President and Prime Minister were read out on the occasion. Both the leaders paid rich tribute to founding fathers for their vision, impeccable leadership and immense sacrifices of the Muslims of sub-continent to achieve a separate homeland. While expressing solidarity with the Kashmiri, the leadership underscored that we should not forget our Kashmiri brothers and sisters in Indian Illegally Occupied Jammu and Kashmir (IIOJK), struggling for their right to self-determination under extremely adverse circumstances marked by illegal Indian occupation and unspeakable repression. They reassured that Pakistan will continue to extend its full support to the Kashmiris in their just cause.

In his remarks Charge d’Affaires shed light on the inspiring life of Quaid-e-Azam and said that all Pakistanis need to work actively for the prosperity of their homeland in accordance with Quaid’s vision.

While highlighting the achievements of Prime Minister Imran Khan’s government, he said that timely and effective Covid-19 response strategy has been appreciated by the world. With the blessings of Allah Almighty Pakistan remained protected from the worst effects of the pandemic. He urged the Pakistani community in France to excel in all fields and project positive image of Pakistan through their conduct.

Mr. Qureshi highlighted that Pakistan’s positive contribution in promoting global peace and security. He also underscored the vibrant role Pakistan’s women and youth are playing in the development and progress of the country.

The event included poetry recitation by children and certificate distribution among the participants.

On the occasion, the Embassy also arranged a photo exhibition showcasing the vibrant culture, landscape and history of Pakistan. While inaugurating the exhibition Charge d’Affaires said that Pakistan has immense potential for tourism and has been a welcome destination for tourists from across the world.

The ceremony concluded with the prayer for continued progress of Pakistan.

A seminar was organized at the Embassy of Pakistan here today to observe the Youm-e-Istehsal-e-Kashmir marking the completion of two years since Indian illegal and unilateral action of altering the internationally recognized special status of Jammu and Kashmir. Members of French civil society and media as well as Pakistani and Kashmiri communities in Paris attended the event.

Charge d’Affaires a.i. Mr. Abbas Sarwar Qureshi emphasized that during the last two years residents of Indian Illegally Occupied Jammu and Kashmir (IIOJK) have been subject to unprecedented form of human rights abuses like extra judicial killings, enforced disappearances, communication blockade, as well as suffocating curfews. But, he said, no repression can crush the determination of the Kashmiri people.

While highlighting the illegal actions of Indian government taken on August 5, 2019, he said that by allowing Hindus to settle down in the disputed territory, India is changing the demographic status of IIOJK in an effort to reduce Kashmiris to a minority in their own homeland.

He reiterated the commitment of government of Pakistan in supporting the Kashmiris in their just struggle and legitimate right to self-determination, in accordance with international law, UN Charter and relevant UN Security Council resolutions and mentioned that Prime Minister Imran Khan considers himself as an ambassador of the Kashmiri people.

Expressing his views on the occasion French journalist Mr. Paul Comiti shared his experience of visiting Azad Jammu and Kashmir in 2019 and said that he was pleased to see that people in AJK were leading a life of security and freedom. The situation there seemed to be in marked contrast to what was happening in IIOJK.

He said every society needs hope to survive, and it is the responsibility of the international community not to let hope of the people of IIOJK die down in the face of India’s illegal occupation and continued aggression.

Other speakers of seminar also criticized the Indian government for its illegal actions of August 5, 2019 and showed support and solidarity for Kashmiris in their just struggle for right to self-determination.

A documentary showcasing the atrocities committed in IIOJK since August 5, 2019 was shown to the audience and messages of President, Prime Minister and Foreign Minister were read out.

On this occasion, a photographic exhibition was also held at the chancery, in which historical photographs of the Kashmir struggle against Indian military siege were put on display.

Participants were assured that investment done in RDA is not only safe but also sharia compliant. Upon completion of formalities the account is opened in just 48 hours and banks are carrying out their monitoring of the accounts on 24/7 basis. Funds can be deposited from overseas and withdrawn from Pakistan and any time can be repatriated out of Pakistan.

While expressing his views he said that government had won the hearts of overseas Pakistanis by taking the RDA initiative and mentioned that members of the Pakistani community in France had been looking for means to securely invest their hard-earned money in Pakistan, which was possible through RDA. 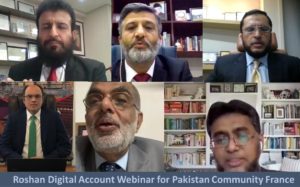 Mr. Qazi said that on the instructions of Prime Minister’s Office four Khuli Katcheris have been held in which complaints of the community were listened to and steps taken for their prompt redressal. He said last Friday of each month has been fixed for these meetings so that community members can plan their engagements accordingly in advance.

He emphasized that the Embassy is doing its best to facilitate the community and provision of services to the community was kept operational even during lockdown period. He informed that WhatsApp groups have been made for Pakistani students and professionals so that their issues can be resolved without delay.

He mentioned that throughout the Covid-19 pandemic support was provided to destitute community members, especially for the transportation of dead bodies to Pakistan. To facilitate the members of Pakistani community an online appointment system has been launched so that people do not have to wait for their turn. However, all those who come to the embassy without prior appointment are also entertained, he added.

Charge d’Affaires told the community members that the Roshan Digital Account initiative of the government of Pakistan has been a resounding success as more than 150,000 Pakistanis from over 170 countries have so far invested 1.25 billion dollars in it. He encouraged the community members to make best use of the opportunities provided by it.

He informed the community members that on the longstanding demand of Pakistani community, a NADRA desk will soon be operational at Pakistan Embassy Paris, which would create efficiency in provision of consular services.

Members of the community appreciated the services being provided by the Embassy in a timely manner and gave their suggestions. They also requested the Embassy to play a role in resumption of PIA flights to France. Charge d’Affaires assured them of embassy’s full cooperation in further facilitating the community. 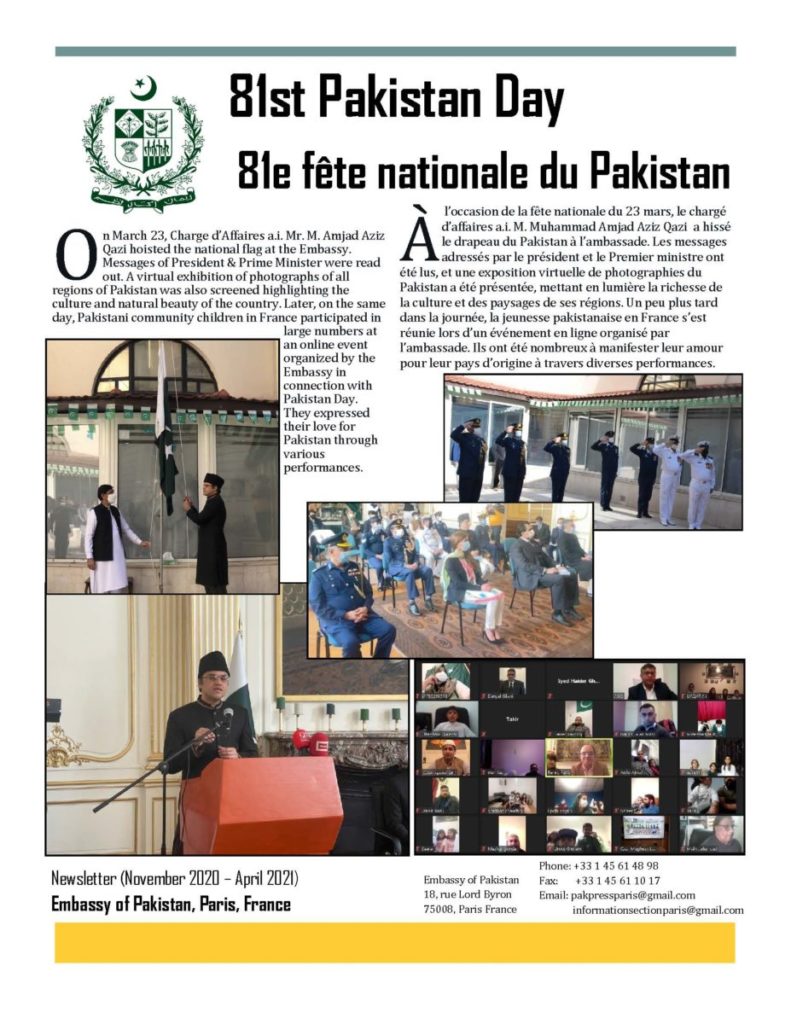 Please click on the picture below to view our digital newsletter 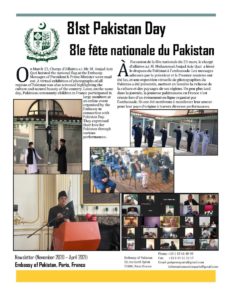 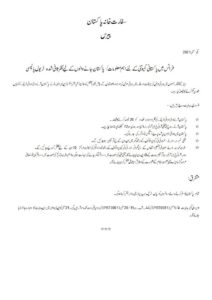 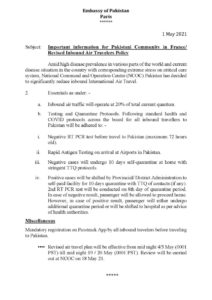 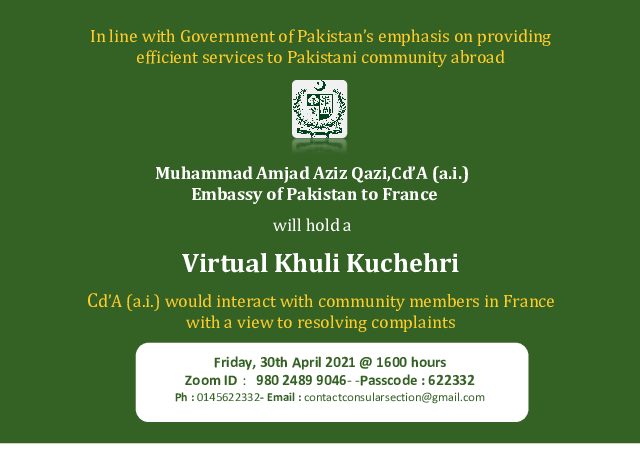 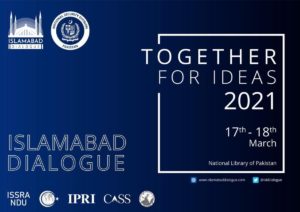 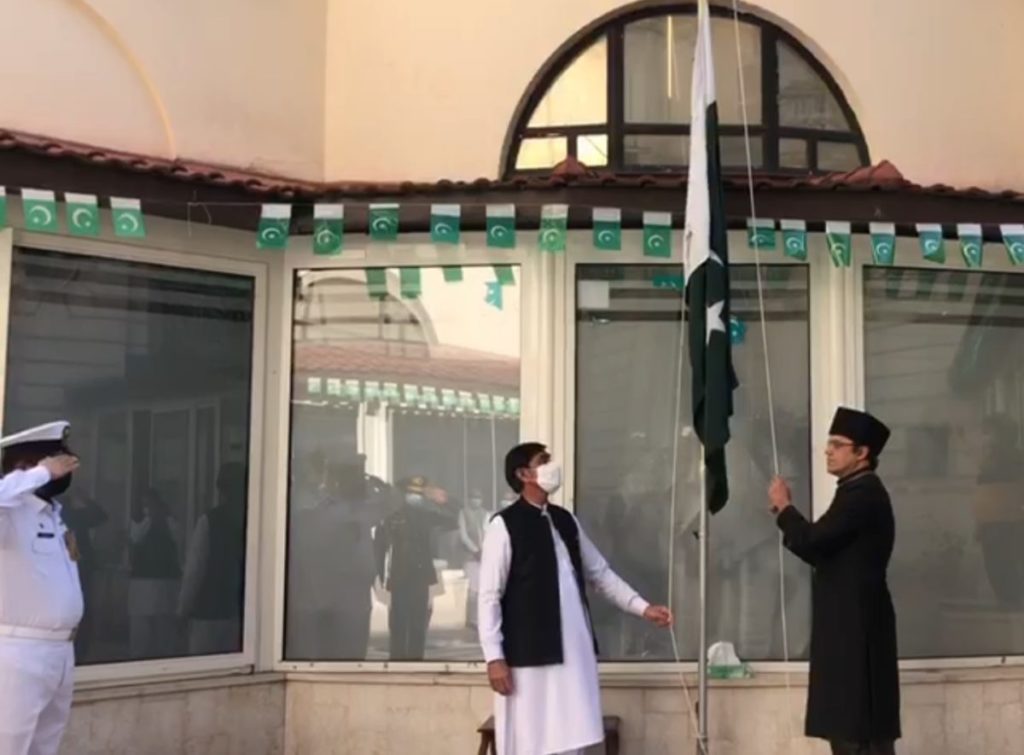 Pakistan’s flag was hoisted at a ceremony held at  Pakistan Embassy in Paris this morning to celebrate Pakistan Day. Participation at the event was restricted due to recent lockdown imposed by the French government in view of the ongoing third wave of Covid-19.

Messages of President and Prime Minister of Pakistan were read out on the occasion.

In his remarks Charge d’Affaires. Mr. M. Amjad Aziz Qazi said this day changed the course of history as Muslims of the Indian subcontinent adopted a resolution demanding a separate homeland for themselves under the leadership of Quaid-e-Azam Muhammad Ali Jinnah at the annual session of All-India Muslim League on 23 March 1940.

He said on this day we pay homage to the Quaid and other leaders of Pakistan movement who made Pakistan a reality in just seven years after passing of the resolution. He also said that path showed by Quaid continues now under the leadership of Prime Minister Imran Khan to make Pakistan an Islamic democratic welfare state on the model of Riasat-e-Madina.

He also said this day Pakistan reaffirms its support to the brothers and sisters of Indian Illegally Occupied Jammu and Kashmir who continue to face Indian military siege. He emphasized that Pakistan will continue to provide political, diplomatic and moral support to the Kashimiri people until they get their right of self determination as per UNSC resolutions.

The Embassy of Pakistan also arranged a virtual exhibition of the photos of natural beauty and culture of Pakistan at the Embassy’s website.