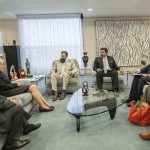 Mr. Baligh ur Rehman, Minister of State for Education and Professional Traning, Permanent Delegate/Ambassador of Pakistan in Meeting with Director General UNESCO 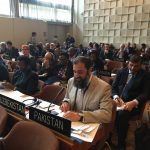 Mr. Baligh ur Rehman in UNESCO

Minister of State for Federal Education and Professional Trainings MR. Mohammad Baleegh ur Rehman has asked UNESCO to ensure that an effective oversight is kept on those countries which are to contribute towards financing of 2030 Education Agenda Framework for Action. He said this while making a statement at UNESCO forum of the said agenda. He said that all members being the inhabitants of planet earth have embarked on an ambitious and visionary journey of hope, aspirations and good wishes, which is expected to change the world for better. He said that most important among all goals is to ensure equitable quality Education and promotion of lifelong learning opportunities.

He acknowledged that he goal is ambitious which talks of opportunities for learning, equity, quality and inclusiveness. In short, it talks of providing a balanced, a level playing field to all children and humans, at least in educating them, in equipping them with tool of knowledge and skills, enabling them to lead a better life and stay protected from menaces of extremism, crimes, poverty and other evils, he further said. He pointed out that Pakistan as a member state and as Chair of E-9 countries, has played an active role in finalizing EDUCATION 2030 – FRAMEWORK FOR ACTION. This framework is a forward looking and pragmatic document and do-able plan, he said.

He hoped and expected that while United Nations and UNESCO have an effective oversight on governments around the globe in seeing to its true implementation, an effective oversight is also kept on those countries who are to contribute as all of us know that without that adequate financing, it would not be possible to achieve the goals, unless Overseas Development Assistance, as envisaged and designed is realized.

Earlier, he had a meeting with Director General UNESCO Irina Bokova. Ambassador of Pakistan to France Mr. Ghalib Iqbal was also present during the meeting.