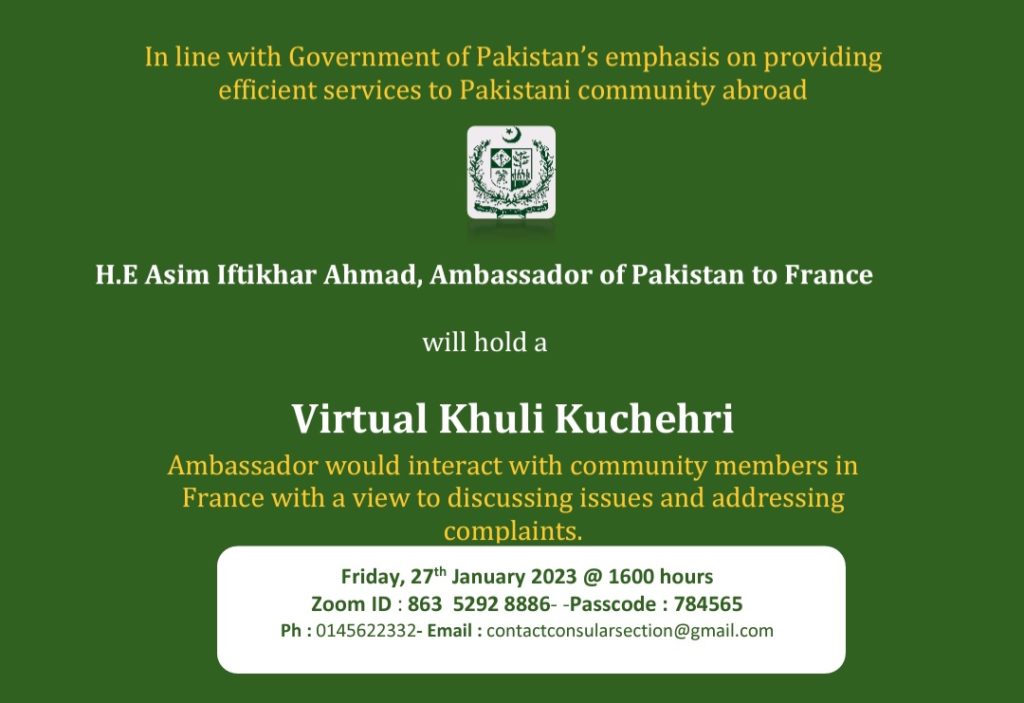 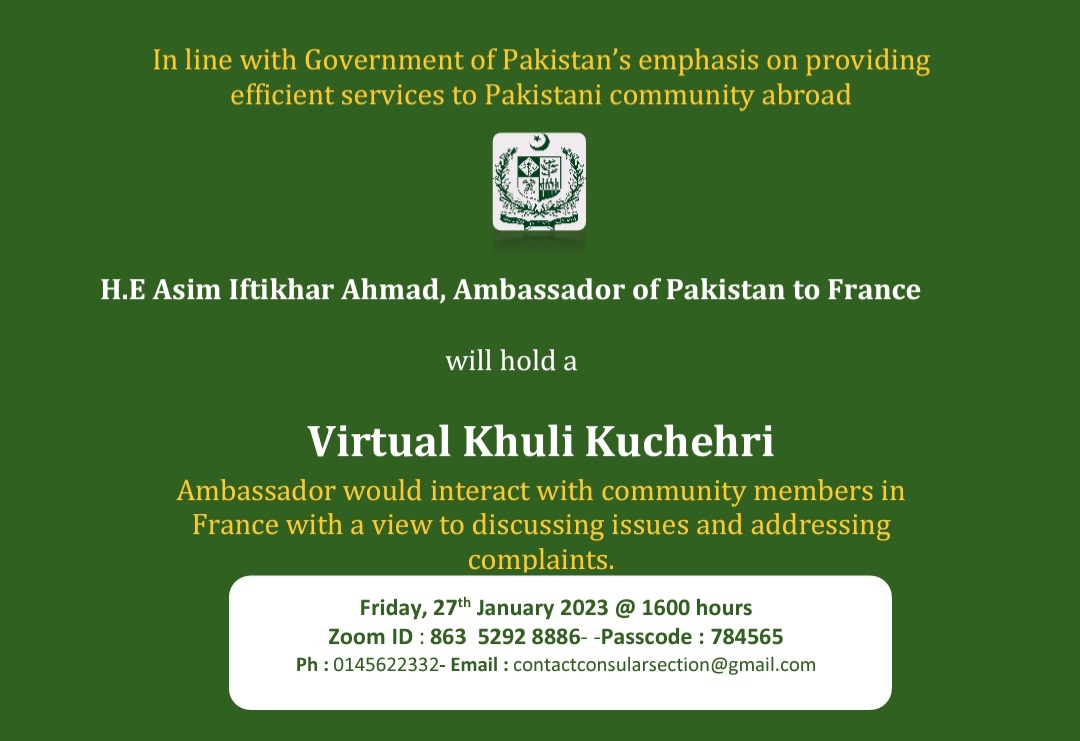 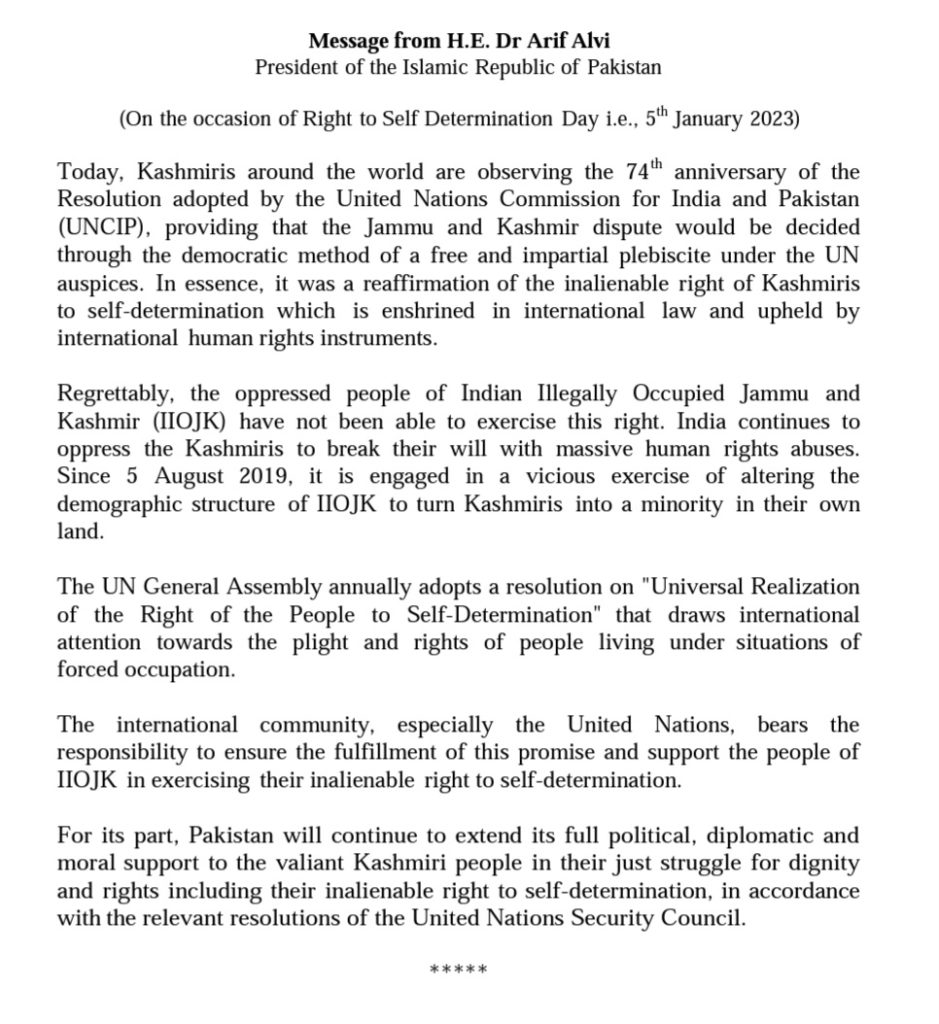 Message from H.E. Dr Arif Alvi President of the Islamic Republic of Pakistan on the occasion of Right to Self Determination Day i.e., 5 January 2023 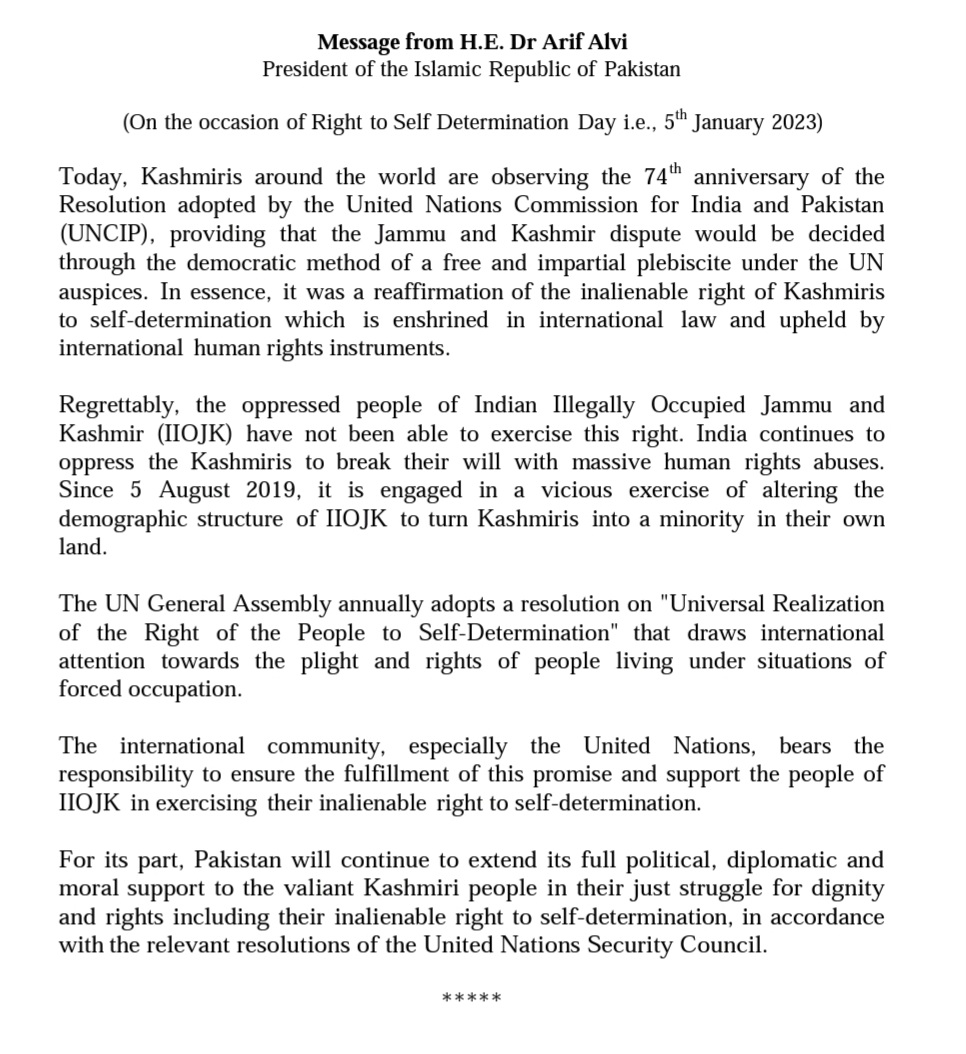 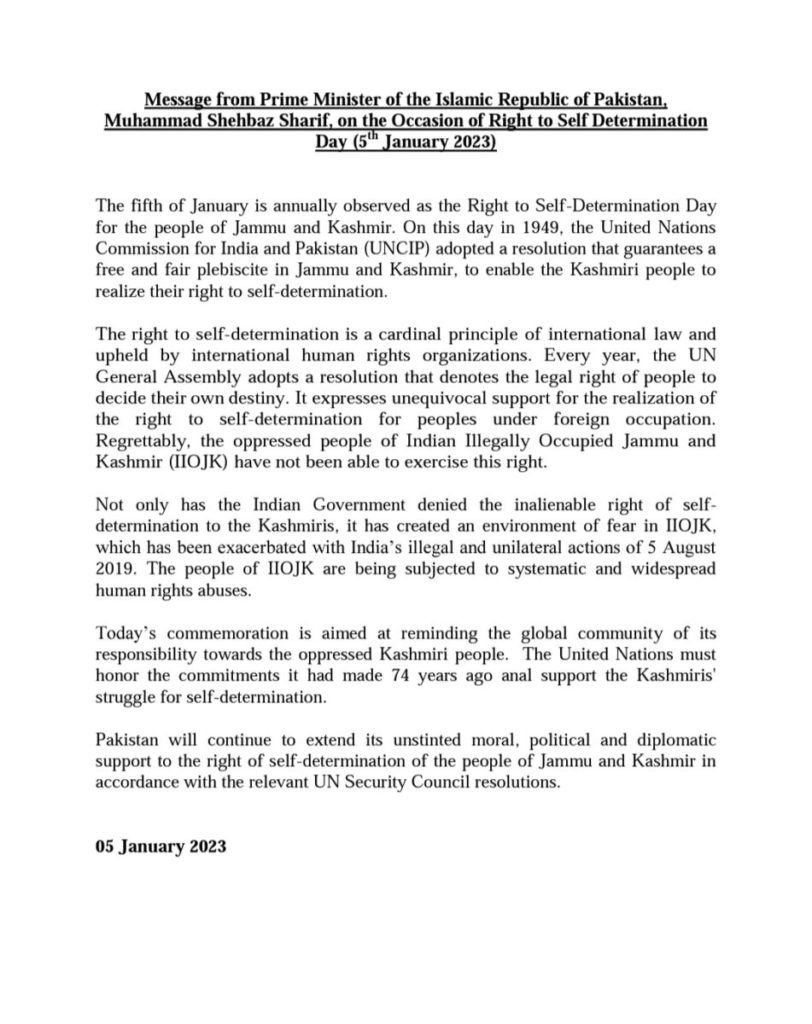 Message from Prime Minister of the Islamic Republic of Pakistan, Muhammad Shehbaz Sharif, on the Occasion of Right to Self Determination Day (5′ January 2023) 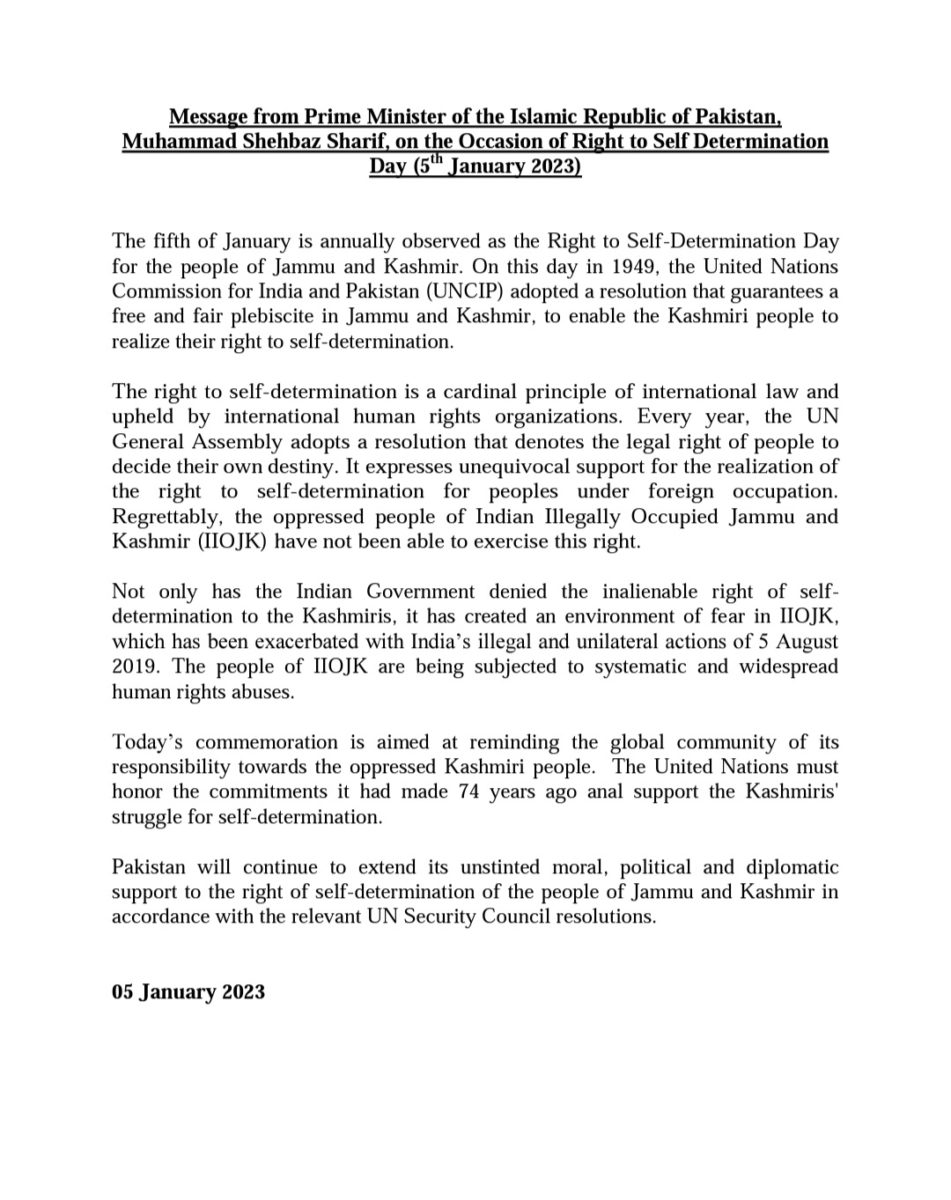 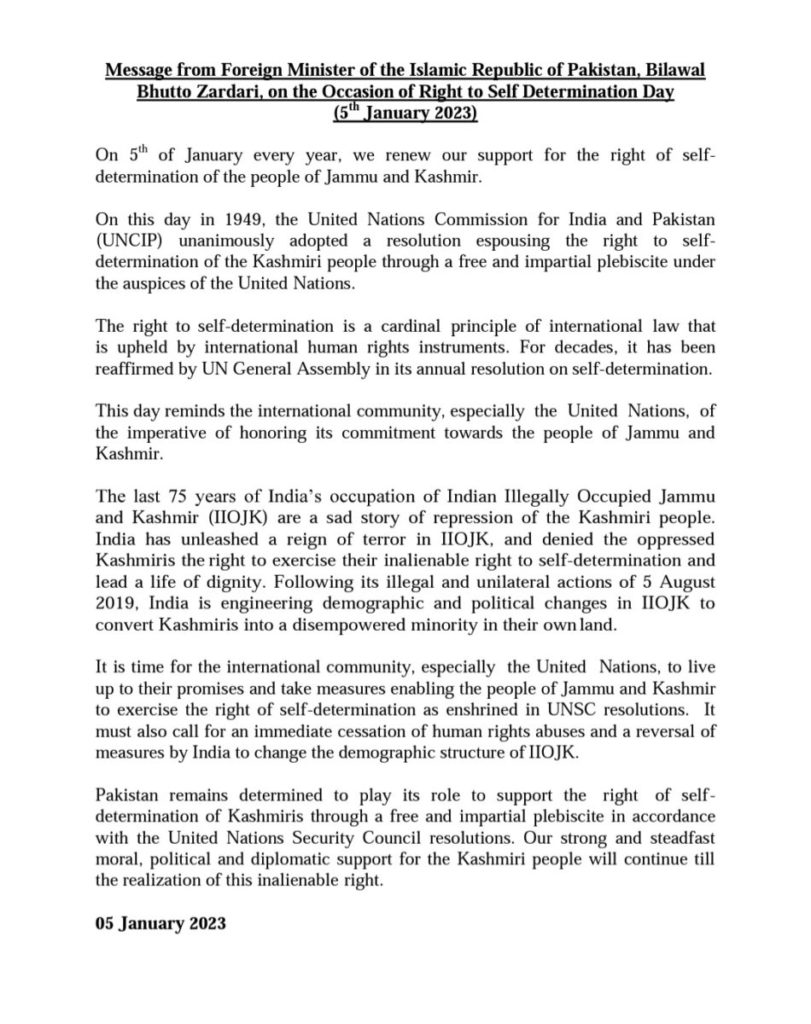 Message from Foreign Minister of the Islamic Republic of Pakistan, Bilawal Bhutto Zardari, on the Occasion of Right to Self Determination Day (5 January2023) 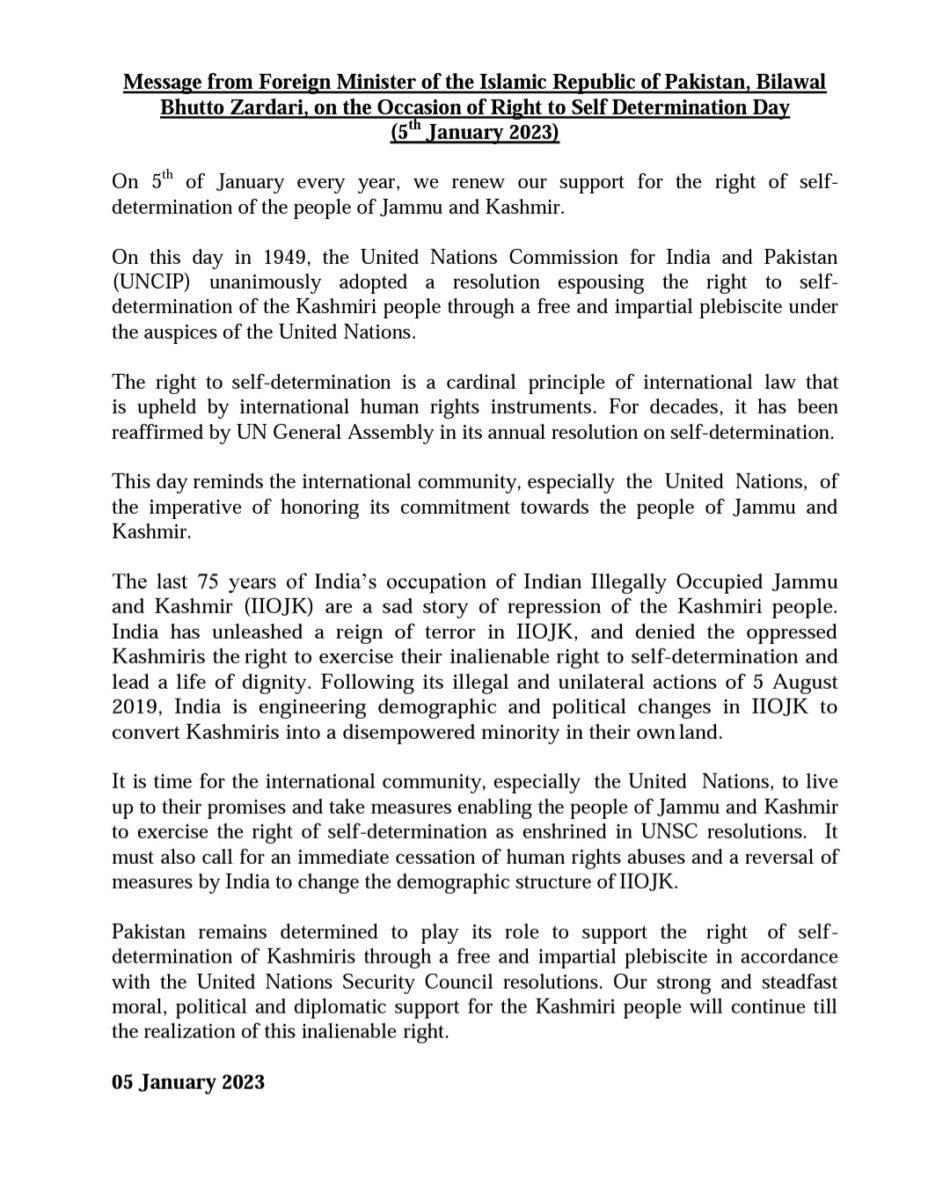 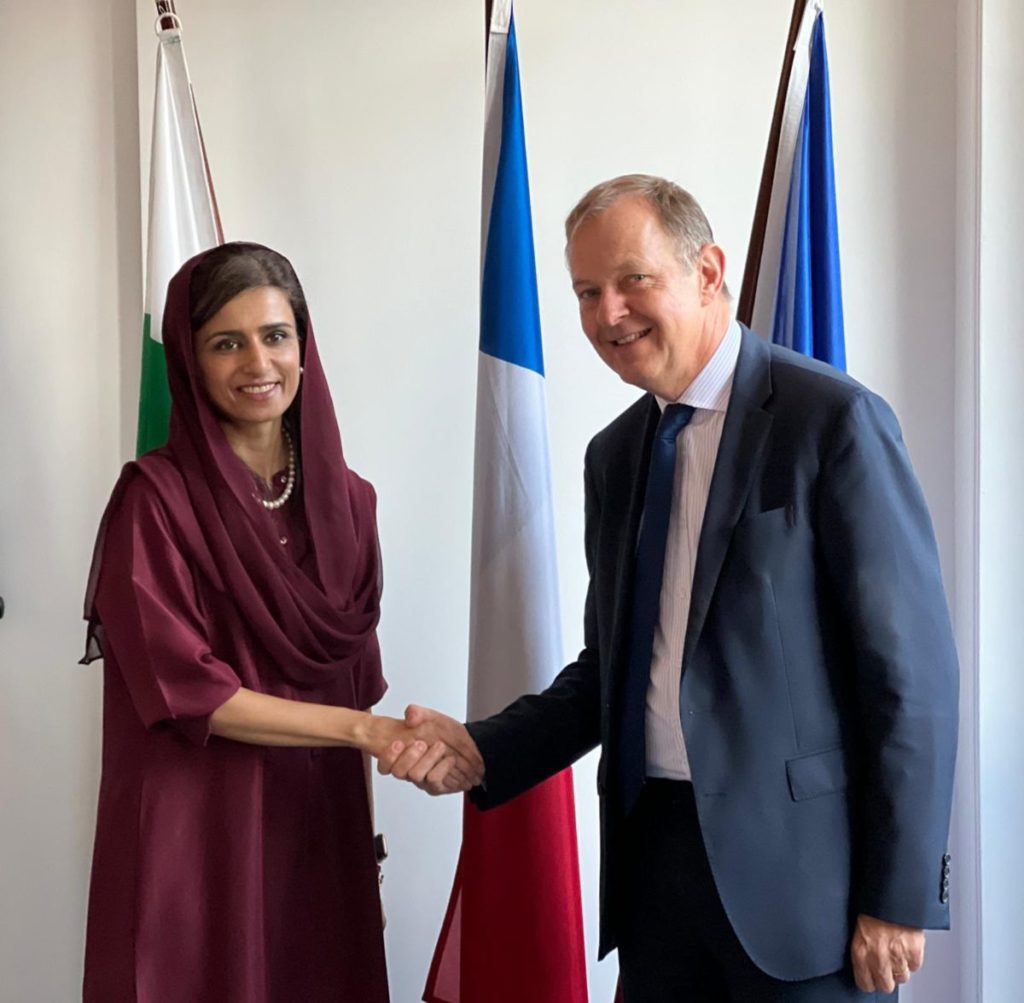 Embassy of Pakistan
Paris
*****
Press Release
October 20, 2022
Minister of State for Foreign Affairs, Ms. Hina Rabbani Khar today met Mr. Thierry Pflimlin, President France-Pakistan Business Council; Mr. François Bitouzet, Managing Director VivaTech; delivered a talk at Paris School of International Affairs, Sciences Po University; and met a delegation of Association of Grandes Ecoles and  Campus France.
In her meeting with Mr. Thierry Pflimlin, who is also CEO TOTAL Global Services, trade and economic relations between Pakistan and France as well as investment opportunities in Pakistan came under discussion.
During the meeting with Mr. François Bitouzet, MoS discussed developing linkages between startup sectors of both the countries, and participation of Pakistan in next year’s Vivatech event.
The talk to the students of Paris School of International Affairs, Sciences Po university was on the topic “Pakistan and the Emerging World Order”, which was followed by a Q&A session. She also exchanged views with the faculty of the university on education cooperation.
At the meeting with the representatives of Campus France and Conference of Grande Écoles, MoS discussed ways to strengthen institutional linkages and exchanges between Pakistan and France in the field of higher education.
**** 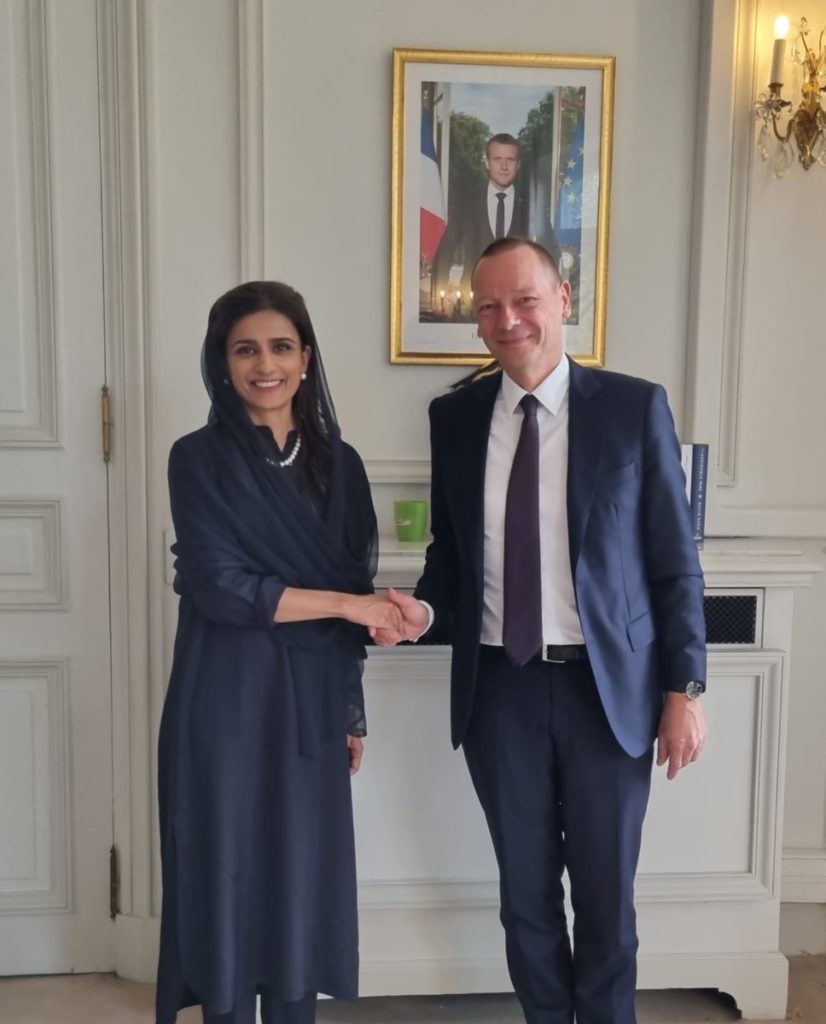 Embassy of Pakistan
Paris
*****
Press Release
October 18, 2022
This morning, Minister of State for Foreign Affairs Ms. Hina Rabbani Khar met Diplomatic Adviser to the French President Mr. Emmanuel Bonne at the Élysée. They discussed the current status of Pakistan-France bilateral relations and exchanged views on important regional and global matters.
Ms. Khar also met today Mr. Bertrand Walckenaer, Additional Director General, French Development Agency (AFD) at Pakistan Embassy in Paris. She lauded AFD’s contribution in energy, sustainable urban development and climate resilience projects in Pakistan. Future cooperation areas also came under discussion.
In the evening, the Minister of State for Foreign Affairs held a meeting with Senator Pascal Allizard, President of France-Pakistan Friendship Group in the French Senate and Senator Madam Gisèle Jourda, member of the Group. The meeting was held at the historic building of the French Senate.
MoS appreciated the role played by Senator Allizard in furthering bilateral relations between Pakistan and France, especially in terms of parliamentary cooperation.
Both sides also discussed political, trade, investment, economic , cultural and education ties between the two countries as well as the situation of floods in Pakistan.
**** 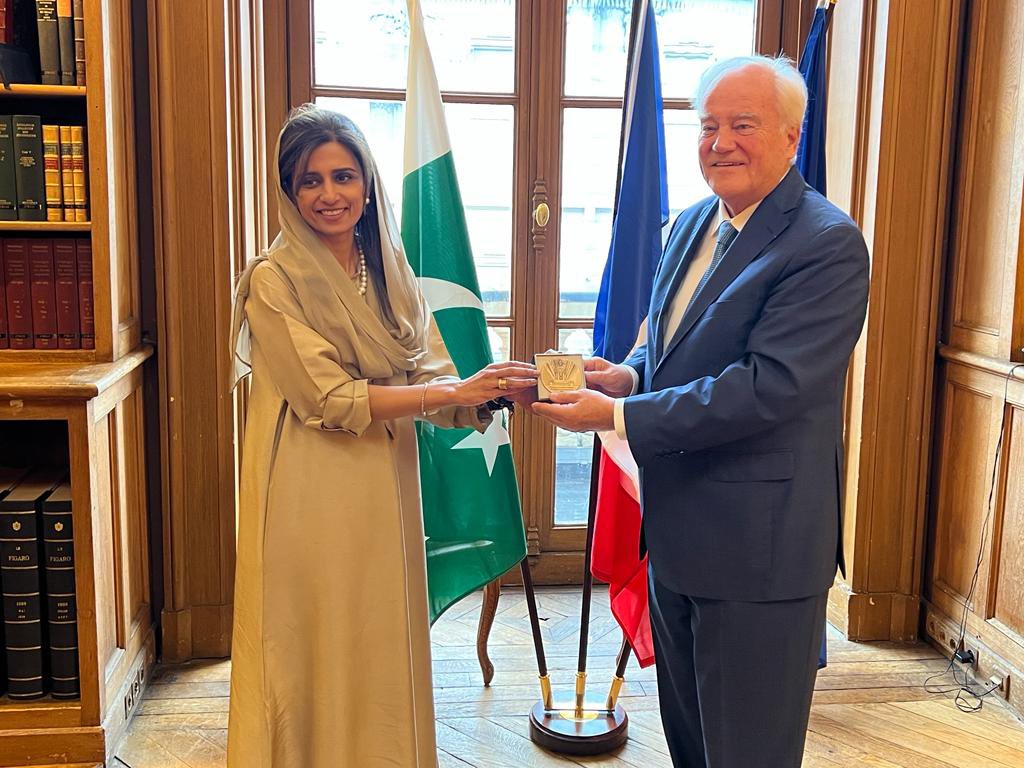 Embassy of Pakistan
Paris
*****
Press Release
October 17, 2022
The Minister of State for Foreign Affairs, Ms. Hina Rabbani Khar, held meetings today with Mr. Christian Cambon, President Commission for Foreign Affairs, Defense and Armed Forces of the French Senate and Mr. Jean-Louis Bourlanges, President Foreign Affairs Committee of the French National Assembly.
The meetings were held at the French Senate and National Assembly respectively.
Pakistan- France bilateral relations including parliamentary cooperation, situation of floods in Pakistan, as well as regional and global issues of mutual interest were discussed during the meetings.
MoS extended an invitation to both the Presidents to visit Pakistan to further strengthen parliamentary contacts and cooperation between the two countries.
Earlier in the day, MoS held a roundtable with a group of French intellectuals, members of think tanks and scholars. She shared Pakistan’s perspective on important national, regional and global matters, while discussing in-depth the issues raised by the participants.
————— 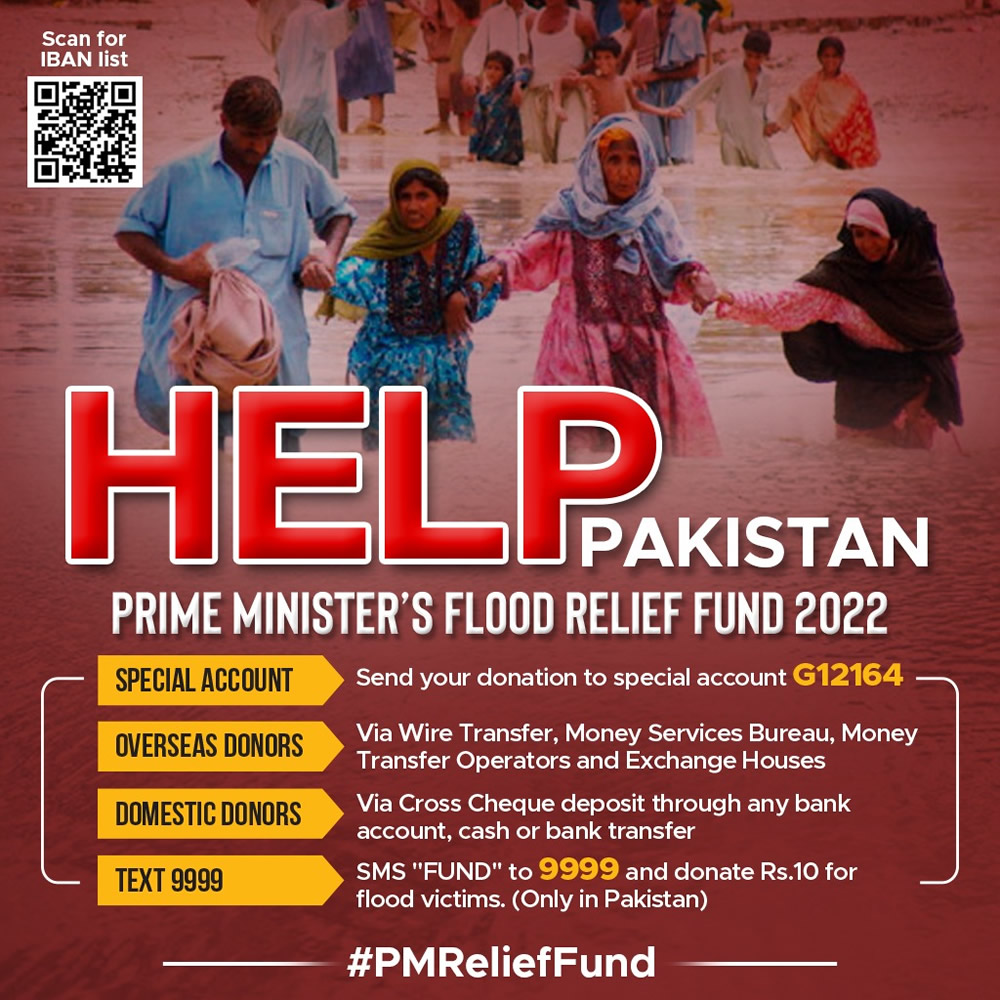 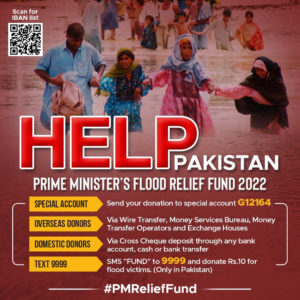 Pakistan has been ravaged by unprecedented rainfall and severe flooding during this monsoon season. It has received the highest amount of rainfall this year i.e., 170% higher than the previous record. The rains have caused severe flash floods, hill torrents and urban flooding. 33 million people have been affected so far. While the provinces of Sindh and Balochistan have been the most affected, all other provinces and regions of the country have been affected too. 937 persons have died and 1,343 people have been injured so far. Hundreds and thousands of people have been displaced and over half a million homes have been destroyed. Houses, crops, livestock, and communication infrastructure have been severely damaged. Sadly, the number of casualties and injuries are expected to increase. The federal and provincial governments have been carrying out rescue and relief operations tirelessly with support from the Armed Forces and other departments.

However, given the unprecedented size of the calamity, more resources are needed to urgently help flood victims. Please join hands with the Government of Pakistan to help those in need. Your contribution can save lives and human dignity.

Please donate to the Prime Minister’s Relief Fund 2022 by transferring funds to account number G 12164 at any Pakistani bank. You can also contribute by SMSing “Fund” to 9999. 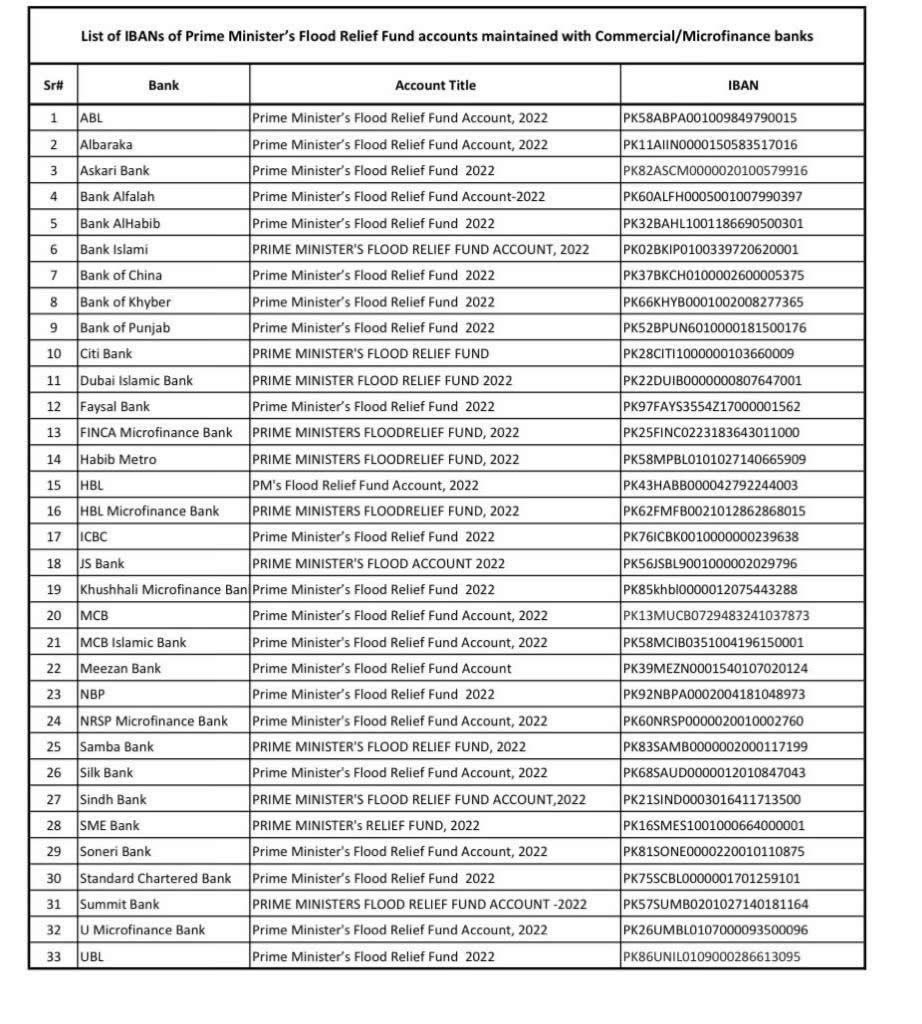 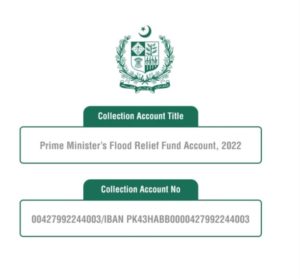 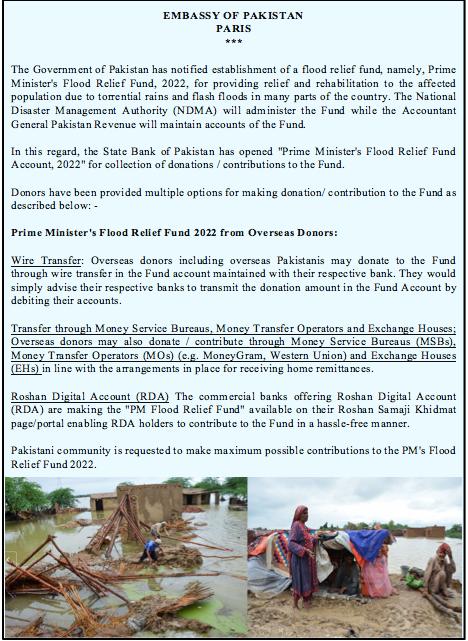 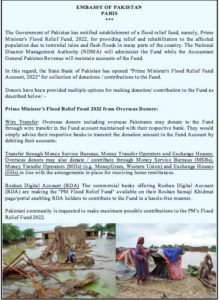